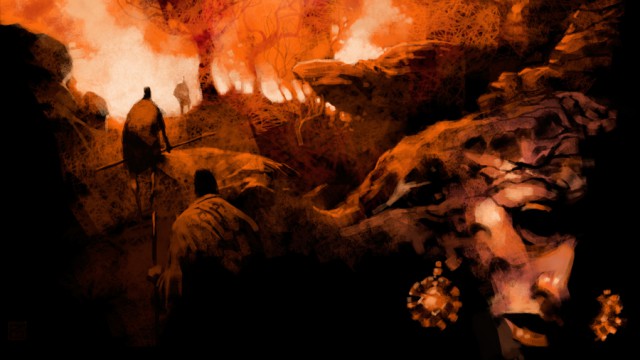 TRILOKA means “the three worlds”; it is used in Hindu mythology to depict the three kingdoms of the known universe, or the Lokas: Swargaloka, the land of gods; Mrityuloka, the middle kingdom of men; and Pataloka, home of the Asuras, the fallen gods, and demons.

TRILOKA is the open project for an epic saga in 7 graphic volumes, conceived and written by Marc Antoine Jean and brought to life, visually, by myself. TRILOKA has involved several other people, bringing together a multi-disciplinary team that developed a promotional website, composed an original soundtrack and much more. Unfortunately TRILOKA is currently in standby, as the story is already fully written and the concepts of characters and environments well defined but a consistent amount of money is required to continue the project.

TRILOKA will soon be given new life and new chances of production. Here are several concepts and a few sample pages, together with the video-trailer we created to promote the project.