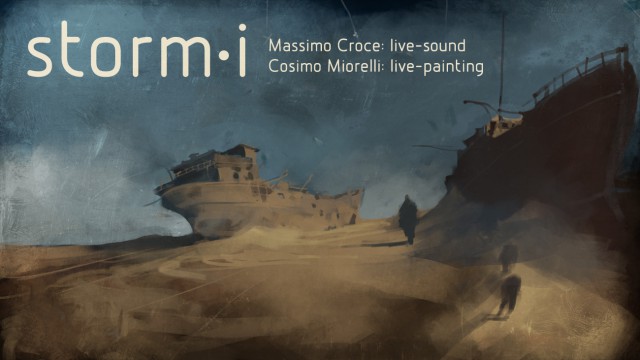 Storm•i was conceived as a live-storytelling performance in the frame of ESCAPES, an international conference on forced migrations that took place at Fabbrica del Vapore, Milano, Italy in June 2015.

A series of seminars, panels, discussions and presentations focused on the issues regarding forced migrations and borders animated the 2-days convention, patrocinated by the University of Milan.

Sociologist Elena Fontanari, who is working with migrants between Italy and Berlin put me in contact with young migrants from the African Continent who had passed through Italy before landing in Berlin, where also Elena and I live. Their incredible stories were filed with sufferance and struggle but also hope and an almost hilarious confrontation with the absurd and often ridiculous dynamics that divide our World. Together with Elena we decided to transform these people’s stories into an evocative, tale-like story that would embody the hopes, dreams and disillusions of the young pioneers.

Storm-i  (Flocks of birds in Italian) took shape with the sounds and music manipulation of Italian noise-maker Massimo Croce, who  mixed live-tunes with tapes and recordings he made over the 9 years he spent in Cairo, Egypt.

Below are some screenshots from the live-performance.